I decided to do a write-up of the current Fireeye challenge (I am writing during the actual challenge, but the post will be released after the challenge).

The binary itself is 64bit, displays a disclaimer, gets some info from your computer and drops a 2kb 32bit PE file afterwards. This 2kb file is the actual challenge level 1. I didn’t analyze the initial 64bit but I’d advise you to run it in a VM and revert the VM afterwards. I used amazon AWS because I had no 64bit VM at hand.

I ran the 2kb file called “i_am_happy_you_are_to_playing_the_flareon_challenge.exe” in Immunity Debugger. My 2nd time using Immunity actually (I used it only once during the OSCP exam, when I had to modify an exploit). So, if you are not used to debugging or don’t speak assembly language (like me) – no worries! This one is easy! 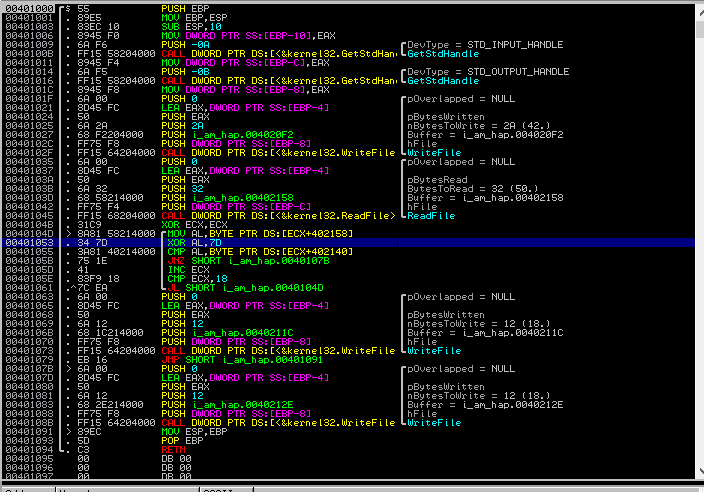 This is the main function. It takes your argument, XORes it and compares it to another value in memory. Since XOR can be reverted with another XOR we can simply take the memory at 00002140 and XOR it with 7D to get the password. Meaning 0x1F XOR 0x7D is the first character (0x62 which is b).

I have written a python program that does the job for us so you don’t have to do it manually using calc: